Waking up in La Rochefoucauld

Friday, June 25 – (west of Cognac): Our breakfast was served in the Duchess’s private dining room and we had the delight of her company. 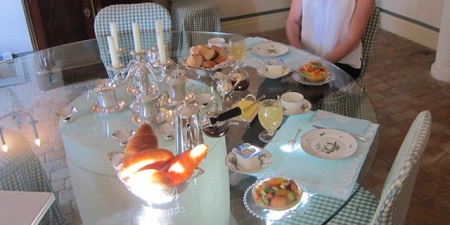 Here we are in front of a portrait of her as a young woman:

She told us some wonderful stories, for example, about how she met I.M. Pei through Jackie Kennedy (who had stayed with her for a year when she was Bouvier). We learned more about the chateau and spoke briefly about her interest in improving the website.

Before leaving in the late morning, we had a private tour of the rooms which are not normally open to the public. The Duchess pointed out a capital in the ground floor galleries in which a large monkey had a smaller one in its arms (story about the smaller monkey representing the rational faculty):

Here’s a picture of the model of the I.M. Pei project to replace the fallen tower — rather reminiscent of the pyramid at the Louvre! 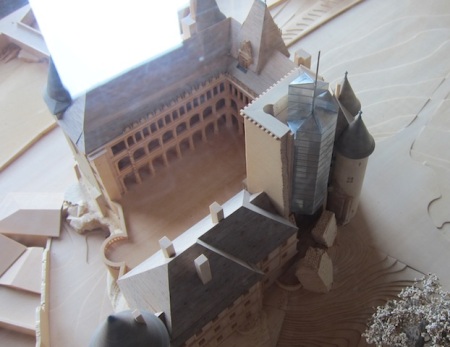 We drove back to Cognac to stay one night more at the chambre d’hote where we’d left the cooler, had another picnic on the Charente (a fisherman had commandeered our spot of yesterday, so we had to move downriver a bit; still quite lovely):

We went to bed early after deciding that we’d be willing to spend a week or so redesigning the website, if the Duchess were agreeable and willing to help out with the text.

This entry was posted on Monday, June 28th, 2010 at 7:52 am and is filed under Daily report. You can follow any responses to this entry through the RSS 2.0 feed. You can leave a response, or trackback from your own site.