Monday, June 28 – Sorges: We started the day burdened by the fact that we hadn’t posted for a few days. It was compounded by the fact that yesterday I took virtually no pictures. So, just after breakfast, I sat down and did the overdue work of putting up the posts which had collected. We left the farmhouse about noon, Deb having struck up a long conversation with the parents of the host (who was leaving not to return until August) who were apparently anxious about being left in charge (when we return on Thursday to meet again with the Duchess) of the Americans. They seemed very relieved to discover that Deb could indeed carry on a conversation in French and invited us to have an aperitif of house-made pineau on our return.

We had a number of errands to do in La Rochefoucauld before leaving, perhaps the most challenging being to see a French doctor who might write a prescription for the drug I was short of. (My doctor’s office adamantly refused to fax a prescription — against the law! — and was of zero help in correcting the error made by the affiliated pharmacy in filling my prescription with an insufficient quantity.) In the end, the tourist office gave us a list of local doctors, we walked to the office of the nearest general practitioner and discovered on a brass plaque outside his door that he saw patients without an appointment on Monday afternoons from 2 until 6pm.

We showed up at 2:30p to an empty waiting room and soon the problem was solved, including a call by the doctor (who spoke fine English) to the local pharmacy to confirm that they had the medication on hand.

(The photo shop that could have transferred the video off of the memory card was, like many merchants, closed all day Monday.)

So, about 3:30p, we headed for Brantôme, said to be “the Venice of the Périgord.” We stopped for coffee when we got there, listened to all the English speakers surrounding us at the local cafe:

and consulted the Michelin red guide (online, of course, on the iPad) to size up the restaurant situation in Brantôme. Among the listings was the “L’Auberge de la Truffe” only 17km away in Sorges, with very good notices in the comments section. That sealed it: off we went.

We had a hard time finding the restaurant in the little village of Sorges but we knew it had to be very close by when we saw a chambre d’hôte sign. We decided to check it out and, again, were met with an old, very substantial mini-chateau with a charming interior and fine bedroom. 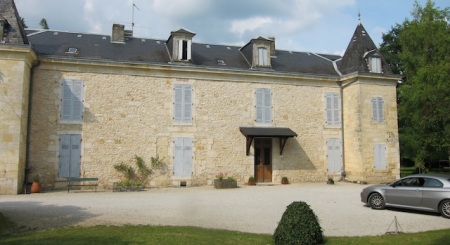 The hosts are delightful — he wanted to get back to the soccer game he was watching on TV when we pulled into his driveway, and she brought us some cherries just picked from their tree.

Our meal at dinner could hardly have been improved upon. We started with the touted truffle omelette:

and something I’d never seen before, a carpaccio of magret (raw, not smoked, and garnished with walnuts):

We will definitely try to reproduce this when we get home!

We then divided the “Foie Gras: froid et chaud”. First the chaud, which was garnished with the very mistaken flavor of strawberries:

with an unusual cereal bread:

It came with a wonderful mâche salad with walnut oil vinaigrette (walnuts being a major local crop):

Altogether, with 50cl of quite splendid Bergerac house wine: 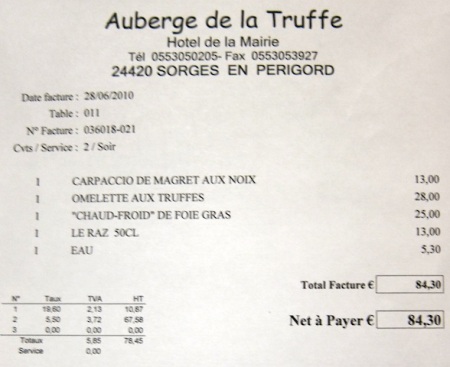 This entry was posted on Saturday, July 3rd, 2010 at 1:47 pm and is filed under Daily report. You can follow any responses to this entry through the RSS 2.0 feed. You can leave a response, or trackback from your own site.