Best Hypermarket Ever! And Reims.

Thursday, May 27 – Verdun: Did I mention the rain yesterday? Well, it was no problem because it occurred only while we were driving (both morning and afternoon). But today we were greeted with a heavy mist coming down, completely eliminating the possibility of taking the delightful pictures of the vineyards I had imagined last night.

After breakfast we had a superb tour of the production facility of the small producer whose B&B we stayed in. One group of aging bottles was marked as containing 6538 bottles which may have been the yearly production. That would be gross revenue of about $100,000; no wonder they needed the B&B to keep going. But they are clearly serious about carrying on the family traditions — genealogy chart on the breakfast room wall!

As we drove through the rain towards Reims, I expected that we’d encounter a hypermarket of some sort but I never imagined we’d come upon the largest and most impressive hypermarket I’ve ever seen — and I’ve seen a lot (I love ‘em!). It’s a good time to go shopping when it’s raining and we needed a lot of things. In particular, we needed a table and chairs to sit out in the countryside having our picnics. We found some wonderful chairs of modern design (made in China, of course) which we tried out during our lunch picnic in a small park next to the commuter rail tracks in a suburb of Reims (rain conveniently halted):

We felt strongly that we couldn’t leave Champagne without indulging in a full bottle and, happily, the E. Leclerc hypermarket sold cold bottles of very reasonably priced champagne.

Of course, we’re in France to discover culinary delights that we just don’t find in Boston and we found a doozy. I thought I was living on the edge when I discovered oregano-flavored potato chips in Greece but we’ve got that beaten by a mile: Poulet Roti with thyme. You have to taste it to believe it!

Our lunch also consisted of some large shrimp at a bargain price and some salmon roe in a jar which will be perfect as our salt cellar.

After lunch we drive on to Reims and found a parking spot about 100m in front of the cathedral. 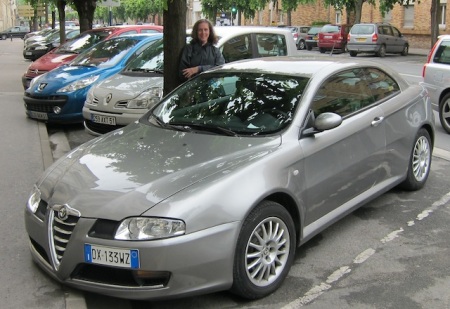 A most impressive one with Chagall stained glass windows from 1971. Most of the church itself was a reconstruction of the original destroyed in WWI with significant help from John D. Rockefeller.

We phoned ahead to a small hotel in Verdun recommended by Rick Steves. While walking around waiting for dinnertime checking out the local restaurants gastronomiques, we found a fishmonger who had some very pretty oysters which we arranged to have opened to carry back to the hotel on ice (7.40euros a dozen):

We bought an aerosol can of whipped cream to go with the strawberries we’d bought in the morning. 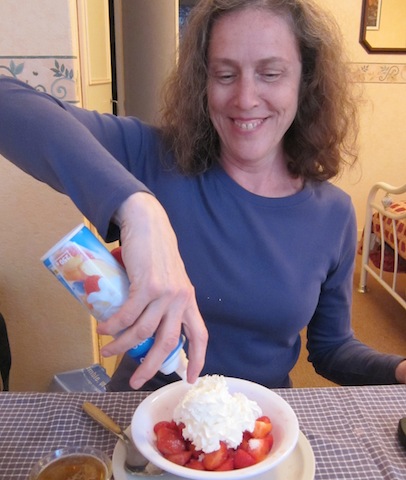 This entry was posted on Saturday, May 29th, 2010 at 7:34 pm and is filed under Daily report. You can follow any responses to this entry through the RSS 2.0 feed. You can leave a response, or trackback from your own site.